We implemented a proactive plan to increase awareness for the national brand, obtaining over 250 million media impressions in the first six months alone.


Heron Agency is the agency of record for Paper Source, a national retail brand with over 125 locations nationwide. We immediately hit the ground running with pitching for gift guides, holiday, planners, and more, and within the first six months of the campaign, we secured placements in PEOPLE MAGAZINE, COUNTRY LIVING, WOMAN’S DAY, CHEDDAR, MARIE CLAIRE, BRIT + CO, HARPER’S BAZAAR, SOUTHERN LIVING MAGAZINE, WGN-TV and FOX 32 totaling more than 263,147,639 media impressions.

In March 2018, Heron Agency brainstormed and executed a strategic campaign surrounding Meghan Markle and her former employment as a calligrapher at Paper Source. We secured an exclusive announcement in PEOPLE MAGAZINE, as well as additional features in other national consumer publications and news outlets including GOOD MORNING AMERICA, MARIE CLAIRE, TRAVEL + LEISURE, REFINERY29, INSTYLE, WOMAN’S DAY, and ELITE DAILY. Within the first three days of the announcement, we secured over 189,267,508 media impressions. Aside from the general pitching of Meghan Markle’s affiliation with Paper Source, we worked to create activations within Paper Source stores to keep the brand in the trending conversation surrounding the Royal Wedding. These activations included a DIY fascinator making class that took place on the days leading up to the Royal Wedding, as well as on the actual date, and calligraphy classes on invitations, in homage to Markle’s hidden talent. Through this, we were also able to secure local broadcast TV segments with Chicago’s NBC 5, ABC 7, and FOX 32 affiliates to further remain a part of the trending story.

As an agency that continues momentum throughout each of our campaigns, we have continued a strong track record of delivering results through timely, strategic pitching and focusing on the launch of the company’s new self-care/CBD product line and partnership announcements with major brands including Neil Lane and Rifle Paper Co. In the last quarter alone, we have secured national coverage including GOOD MORNING AMERICA, THE TODAY SHOW, FOX AND FRIENDS, TOWN AND COUNTRY, BETTER HOMES AND GARDENS, COSMOPOLITAN, REFINERY29, REAL SIMPLE, MARTHA STEWART WEDDINGS, SOUTHERN LIVING and more. 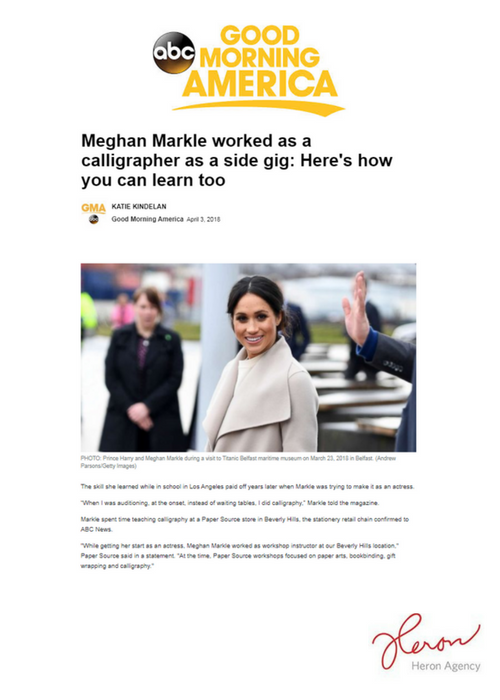